He placed firmly embedded mountains on it, towering over it, and blessed it and measured out its nourishment in it, laid out for those who seek it-all in four days. Then He turned to heaven when it was smoke and said to it and to the Earth, “Come willingly or unwillingly.” They both said, “We come willingly.” (Qur’an, 41:10-11) 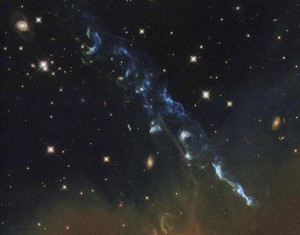 The Arabic word for “samaa’,” translated here as “heaven,” refers to the entire universe. The word “dukhaanun” for “smoke” describes the matter before the universe took its shape-the hot, cosmic smoke present during the creation of the universe, as now acknowledged by scientist.

This word in the Qur’an, in pinpoint fashion, describes this smoke very accurately for it is a warm body of gas containing mobile particles connected to solid substances. Here, the Qur’an has employed the most appropriate word from the Arabic language for describing the appearance of this phase of the universe. Let us note that only in the 20th century have scientists discovered that the universe emerged from a hot gas in the form of smoke.

In addition, the word “thumma,” translated as “then” in the expression “Then He turned to heaven when it was smoke,” bears other meanings such as “at this, in addition, furthermore, moreover, again, once more.” Here, “thumma” is employed not as an expression of time, but as an additional clarification.

The fact that such information about the creation of the universe is given in the Qur’an is nothing short of a miracle of the Qur’an.