The Umrah or (Arabic: عمرة‎) is a pilgrimage to Mecca, Saudi Arabia, performed by Muslims that can be undertaken at any time of the year. In Arabic, Umrah means “to visit a populated place”. As a technical term used in the Sharia, Umrah means to perform Tawaf round the Kaaba and Sa’i between Al-Safa and Al-Marwah, after assuming Ihram (a sacred state), either from a Miqat like Zu ‘l-Hulafa, Juhfa, Qarnu ‘l-Manāzil, Yalamlam, Zāt-i-‘Irq, Ibrahīm Mursīa, or a place in Hill. It is sometimes called the ‘minor pilgrimage’ or ‘lesser pilgrimage’, the Hajj being the ‘major’ pilgrimage and which is compulsory for every able-bodied Muslim who can afford it. The Umrah is not compulsory but highly recommended. (Culled from Wikipedia.org)

I started my journey from Dubai, unlike my fellow brothers from Nigeria, the visa process was very simple, straightforward, and less costly. At first, I was advised to travel by road to even save more, but after some research on the internet, I learnt a lesson or two about the route and how exhausted I will be before we arrive. I purchased my Saudi Arabian airlines ticket to Madinatul Munawwara with a return through Jeddah.

We left on Thursday around 6.30pm and after about 2 hours 30 minutes flight from Dubai, we arrived Madinah Airport around 9.00pm. The airport is small, well maintained, and they have simple immigration process, with a special emphasis to the elderly and women. I set my foot in Madinah with the highest spiritual activism on my mind, I almost answered Yes to any request, until I realized that it is the city I am in complete harmony with, not with the people. Different people from different places in the world went and settled in Madinah, and it was easy for them to call themselves “People of Madinah”, so on the set, you will meet people with different kinds of behaviors, good and bad, even ugly, just like in any other city. I fall in love with Madinah almost instantly, my first sight of the Prophet’s Mosque was the first trigger. It is the most beautiful place I have ever been to, it is a masterpiece of the religious forefront thinkers and innovators, I value their creativity so much.

The above picture is just one of the many entrances available for worshipers, you can enter from any of the gates, but to have a glance on where the burial ground of Prophet Muhammad (SAW), Abubakar Saddiq (RA) and Umar Al Khattab (RA), you have to make your way to the very front, just under the green dome, near the Imam’s mehrab. The place is always crowded, anytime, even in the night. I managed to maintain the second and third row for 2 days straight, which makes me feel very much satisfied with my stay in Madinah. 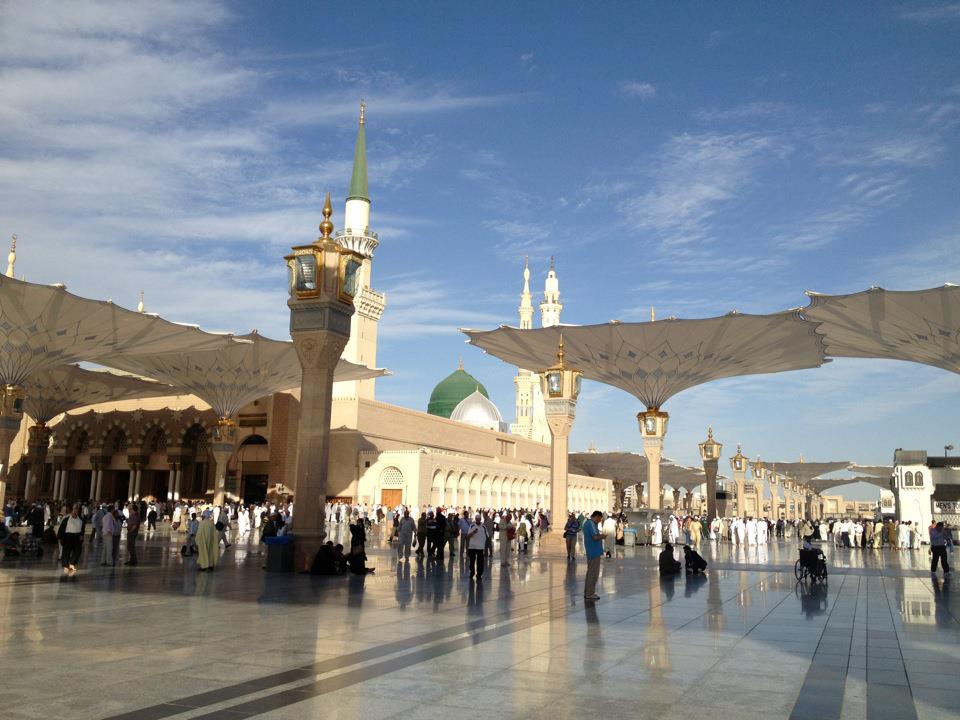 After spending 3 nights in Madinah, I travel to Makkah by road, spending roughly 5 hours on the road. I was already wearing my Ihram before embarking on my journey to Makkah, so I went straight to the hotel and dropped my little bag.

I was advised to perform my Umrah late at night when the crowd is very much less, so I head to the Masjid Haram at about 1am, for the first time, I really struggled so much with my Ihram, especially the top part, which slops all the time due to the cloth being thick and heavy.

It is hard to explain the feeling after setting my eyes on the Ka’aba for the first time. We face the Ka’aba everytime we pray, we call it the Qiblah. I finished the Tawaf (Circumbulation of Ka’abah), the Saei (Safah and Marwah), and shaved my hair the same night, that is why it is called Lesser Pilgrimage, it was very simple for me, and for the fact that there are few people at night. One thing I found so interesting is the fact that everybody is willing to help out with guidance, directions, and even supplications that you don’t know. It was a very nice experience, and I hope Allah have accepted. I absolutely didn’t forget to pray for all those that asked me to pray for them, and even those who didn’t ask, for peace in Nigeria and the world in general.